Shops will appear in the game, and the ones in the war zones will have their prices raised up to 500% to reflect the effects of the war such us flailing economy.[1]

"Almost two years have passed since Squall and his comrades defeated the witch Ultimecia and brought peace to the world.

A peace that was short-lived.

Dollet, sensing Galbadia's weakness after the tyrannical rule of the possessed Sorceress Edea and the many conflicts with SeeD, rallied the resistance factions and remaining Timber military to their cause and set out on a crusade to reverse what the Sorceress War nearly two decades ago did.
Barely six months after Ultimecia was defeated, the world was at war again.

Balamb Garden and SeeD, originally intending to remain neutral in the matter, the route Esthar took, were called upon by the the Timber resistance factions after SeeD's contract with the Forest Owls with leaked. Unable to back out of the all-encompassing "until Timber's independence", Squall and his comrades were washed into the escalating conflict with Galbadia. Galbadia Garden, barely re-established, allied itself with Galbadia unconditionally, pitting SeeD against SeeD, the casualties beginning to rise massively.

And under the surface, a new threat is beginning to rise, a threat that will not only put many lives in danger, but change the world forever."
—Official synopsis.[2]

On December 8th, 2012, Puddor provided more detail on the plot of Sleeping Lion Heart.[1] The main theme of the game is war and its results. Four months after Ultimecia's defeat, Dollet began to reinforce their troops and to war with Galbadia once again to recover their lost freedom while Galbadia was weak and started to hire reestablished Galbadia Garden's SeeD.[1]

Puddor stated that she "doesn't hold back in her games" and intends to show brutality and futility of wars and player along with Squall will often be questioned about these and will try to answer for these. Also, the war from Sleeping Lion Heart was compared to the war from nearly twenty years before the events of Final Fantasy VIII.[1]

Also, Puddor stated that she will develop a 'Prototype' rather than a 'demo': a 'Prototype' version will include basic story outline like a regular 'demo' version, but will also have a large amount of gameplay included to get the player feedback in order to improve the game.[1]

On January 1st, 2013, Puddor published a blog entry giving a large amount of information regarding the newcomer, Lukas Cadara.[3] 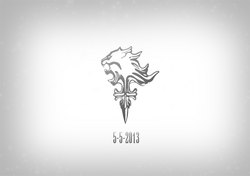 On April 14th, 2013, Puddor posted a teaser image depicting white Griever symbol on a white-and-grey background with "5-5-2013" written beneath it. It is suspected that the teaser image relates to the Release Something Weekend, an event that will happen on RPGMaker.net over the weekend of 4-5th May, 2013, and it will be the 'Prototype' version of the game.[4]

The titles here are the same as used on RPGMaker.net.

Community content is available under CC-BY-SA unless otherwise noted.
Advertisement