"I pity you. You just don't get it at all... there's not a thing I don't cherish!"
—Cloud to Sephiroth, Final Fantasy VII: Advent Children.

Cloud Strife is the main protagonist of Compilation of Final Fantasy VII.

Cloud, along with Tifa Lockhart, makes appearance in Final Fantasy Dreams, both living in the same village. He is friends with Squall Leonhart.

Cloud is a minor character in CosmoFFolitan Adventure.

Cloud is the final character for Sephiroth's episode. He replaces Don Corneo at Don Corneo's Mansion.

When Sephiroth enters his room, the room is locked and Sephiroth is forced to spend night with Cloud, much to Cloud's happiness and Sephiroth's fear.

Cloud Strife, along with Squall Leonhart and Hope Estheim, appear as the three protagonists of Eidolescence. Cloud is an adolescent Eidolon.

This article or section is a stub about a character in Eidolescence. You can help Final Fantasy Fandom Wiki by expanding it.

One of characters that accompanies Cid Marquez during the infiltration on the Research Facility uses "Cloud" as his codename. Like Cloud from Final Fantasy VII he comes equipped with the Buster Sword and uses Braver as his Limit Break. 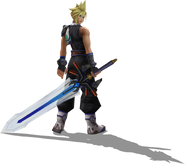